Awareness Is: Be the light

A weekend in Paris. The city of light and love. A city that everybody in the world knows and is like a magnet to millions.

Life is being celebrated wherever you look. Art, food, champagne, colours, lights, play, parcs, music, unique buildings. A city so diverse, where they stand for ‘Liberté, Égalité and Fraternité’. We want to be free. We are equal. We’re all brothers and sisters.

Lovers kiss on a bridge crossing the Seine. In the parcs. Under the Eiffel tower. Ah well, everywhere!

Paris is history and culture. A lifetime would be too short to explore it all.

Whilst walking around the Notre-Dame, impressed by the restauration works going on after an inferno destroyed huge parts of this world famous cathedral, my eyes were caught by what looked like a small parc, next to the river.

In this parc, a monument was ‘hidden’.

A monument to remember the hundreds of thousands who were deported during the second world war. Deported on trains for a journey hell,  the concentration camps. Since one race needed to be ‘purified’, another had to be destroyed…

I know the pictures of Auswitz, Buchenwald, Triblinka and many others, where over 2.7 million people were killed. Murdered, mainly in gas chambers, by extreme hard labour, famine, illness or cold. Or from a broken heart.

I’ve seen these pictures before, also whilst visiting the memorial places like Yad Vashem. I always feel this deep in my bones and my heart cries. So much suffering, so much pain. Unbelievable what people can do to each other. It’s beyond words. Though not easy, we need to keep looking at these pictures, since we should never forget.

Since we lack words, these memorial places all have images or pieces of art, statues to express our feelings.

Yet they always also hold a message. The message, in essence, is always to remember what happened, in order to remind us this should never happen again!

In this memorial place next to the Notre-Dame, there was a long tunnel. On the walls of the tunnel small tokens to honour and remember the ones who lost there lives.

The end of the tunnel was mostly dark, yet also had a clear light. 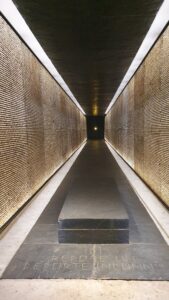 I’m so done with us still creating these kind of tunnels! Another war in Europe where again one nation tries to ‘purify’ another, using deadly force as an excuse to force its will on other people! We can already predict the countless memorials that need to be build to remember, to mourn. At the same time multiple wars are going on elsewhere in the world, and they hardly make the news anymore. Mass shootings, killing innocent people in schools or religious buildings. Where some still justify the flash light coming out of the gun barrel that just sent a bullet to kill a child, instead of being a light of hope…

We need to be a light of hope at the end of the tunnel of pointless suffering.

We need to be the light of love.

We need to be the light that’s going to make the difference.

We need to be the light we want to see in the world.

Share your thoughts Cancel replyPlease do not use offensive vocabulary.

Enter your name and email below to receive instant access to Alex's valuable recources, tips and articles.